Just Alan, the name he goes by, won First Place at the 1997 S.A.M. National Convention Stage Competition for his artistic rendition of Sands of India. Opening with background music, slides and narration of a trip to India, attention then focused on Just Alan, the fakir, sitting center stage.
Synchronized with the narrator, he poured colored sands into the bowl of water, then pulled each out, one by one, perfectly dry. The water, a murky black, then changed to clear water. This was a remarkable performance, different by far from the usual performance. That is Just Alan's approach to magic, a dramatic approach designed to bring the spectator's into the experience. 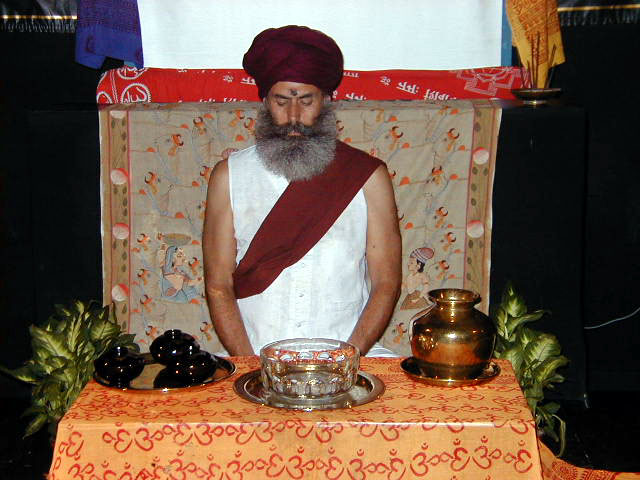 Just Alan's Sands of India at Monday Night Magic
Each Monday there's a totally new line up at the Sullivan Street Playhouse in New York's Greenwich Village, and the featured performers on the show were Eugene Burger, Just Alan, Jamy Ian Swiss, Chris McDaniel and, performing close-up, Simon Lovell, Keith Boudreau and Michael Chaut.
Seated in the lotus position was the mysterious Just Alan, apparently in a meditative state. Dressed in traditional garb from India and with an ashen tilak spot on his forehead in the position of the third eye, Just Alan was surrounded by burning incense. A slide screen was behind him, while before him stood a low table with various paraphernalia. Just Alan is the S.A.M.-award winning magician from Woodstock, New York where his combination cafe/gift store/magic emporium is based.
Just Alan performed a single effect - the "Sands of India." But to reduce this awe-inspiring performance to the name of an often-performed trick is to completely miss the point. As music played, a narrator spoke of the mysterious land of India and a train journey. Slides illuminated his tale.
Water is poured into a bowl and three smaller bowls of sand are introduced, colored yellow, green and red. Meaning is attached to these colors - meaning related to the natural forces around us all. A swirl of Just Alan's hand through the water and it suddenly turned as dark as ink. Handfuls of each color sand are then swirled into the bowl.
Miraculously, a handful of each color sand is brought, separate and completely dry, from the bowl. This is accompanied by narration again relating the sand colors to nature and to the lives of the supposed spectators surrounding the Indian beggar whom we are witnessing. Another swirl of hand through water and the water turns clear, to be poured into a large container in front of the performing area. The lights dim. The thunderous applause begins.
The depth of this performance is one of the most inspiring things I have ever witnessed. Every movement, every moment in this piece has been studied and refined. It is a truly memorable performance piece.

An Evening with Just Alan at Monday Night Magic
Writing video reviews for Genii magazines is fun, but it's important, I think, for all magicians to get out and watch magic performed live for just plain folks and one of my favorite places for doing that is New York's Monday Night Magic, which has a different show each week at the Sullivan Street Playhouse in Greenwich Village. On the show last night were Simon Lovell, David Oliver and Just Alan, with MC Jamy Ian Swiss (my fellow Genii reviewer).
I confess that the reason for my visit was Just Alan, the Society of American Magicians-award winning performer and proprietor of a magic café in Woodstock, New York. The last time I saw Just Alan, he was seated in a lotus position before a large bowl of water, somber and meditative. So imagine my surprise when the sound of disco music filled the theater, multicolored lights blinked, and in swept (that's the only word) Just Alan in a star-studded cape. "Don't you love it! Feel that material! I love my cape - isn't it beautiful?" Just Alan glided through the audience as he handed out bottles of bubbles for people to blow. I almost passed out.
When things calmed down, he talked to the audience about imagination, one of several "themes" for the evening, and then performed Max Maven's "Giant B'Wave" and, with a reference to energy, Jeff McBride's rising card effect, "Kundalini Rising." And here I'll say that Just Alan has the ability to take standard fare and turn the tricks into more than simply interesting stories, but into experiences for the audience, experiences which can deeply touch their psyches and emotions and reach into those areas seldom touched by any but the most brave and adventurous, the areas of existential truth and self-definition. Pretty heavy stuff, huh? And Just Alan makes it not just palatable, but highly entertaining. ...
It is absolutely astonishing to me that Just Alan is able to explain to a group of randomly selected people the fundamentals of Buddhism in an entertaining way. Nothing is pushed down anyone's throat, nothing is overtly challenged in anyone. But the seeds of enlightenment are being planted in the gentlest possible way by this gentle man and I give Just Alan my highest accolades. ...

Just Alan Close-Up at Monday Night Magic
Just Alan proved that he was able to take close-up tricks and turn them into dramatic and memorable miracles, as he performed Dad's Trumpet, a trick in which a chosen colored brass disc releases from a stack of the discs which are enclosed in a brass box and threaded on a cord. The discs were described as "trumpet valves" which belonged to Just Alan's father, and he produced a picture of his father and one of Harry Houdini, for whom his father ostensibly worked as a musician. The story involved the father fooling Houdini with an escape trick!
In another effect, Aunt Doris, Just Alan introduced a small wallet which contained a picture of his mother and her twin sister. The sister was described as a stamp collector and, indeed,the wallet contained several of these, along with an old letter. The letter, from the aunt to Alan, contained a birthday gift - a two dollar bill, signed by the aunt. Just Alan changed these into two one-dollar bills (each containing half the inscription) then into a fiver. The picture in the wallet of the two young girls had changed into a picture of them at their joint 80th birthday celebration, and the stamps had transformed into contemporary versions.

See you next month in Genii.
Matthew Field
Just Alan will customize his Magic for:
Sales Meetings, Motivational Speaking, Work Shops, Weddings, or any Special Event.